The Waifs’ Josh Cunningham gets stuck and unstuck from a bogswamp! 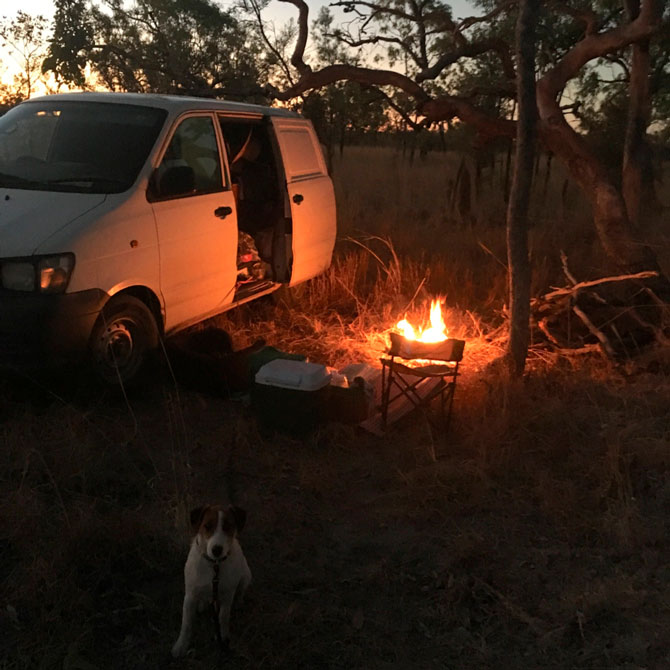 A few years back when The Waifs were doing a West Australian tour, I decided to drive over from NSW rather than take the conventional approach of travelling the 4000km journey in a plane. Adding to the sense of adventure was the fact that my vehicle was a 2002 Toyota Townace.

My intention was to take the long road home when the tour finished and spend time in the Kimberley and the top end – parts of Australia That hold a special significance for me. In August 1992, I met two sisters from Albany WA in Broome. We formed The Waifs and my life has never been the same since. It was a magical time in a magical place. The Kimberley struck a note in me that is still ringing even now. The visits back there have become shorter and less frequent over time but that note is still clear and true deep inside me. 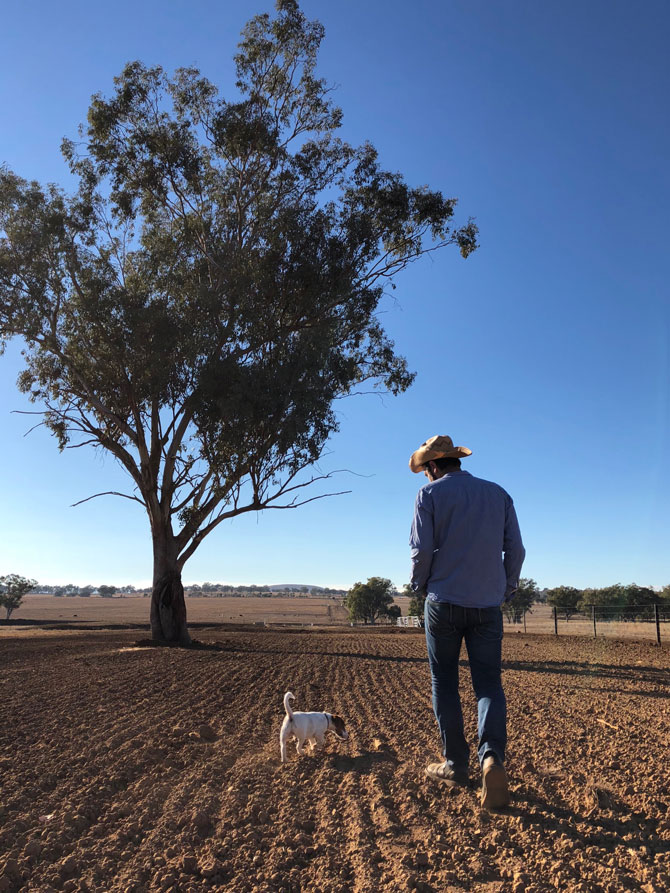 My other intention was to take my little dog, Wilson. He’s such a good mate, and a mate like Wilson is the perfect companion for such an adventure. The gigs were wonderful but the real fun happened when Wilson and I headed for home. We’d drive until an hour from sundown and pull off the road somewhere we could get deep enough into the scrub to set up camp. One particular evening between Halls Creek and Kununurra we found a spot at the base of a rusty ridge beside a big old boab tree. The billy boiled, the stars shimmered and in the distance, the occasional roadtrain on the highway glided silently past. The majestic setting inspired a sense of awe and wonder at the beauty of the country and how healing it can be to immerse yourself in its charms. I began singing up what was around me and a song seemed to write itself – almost like a serenade of gratitude. 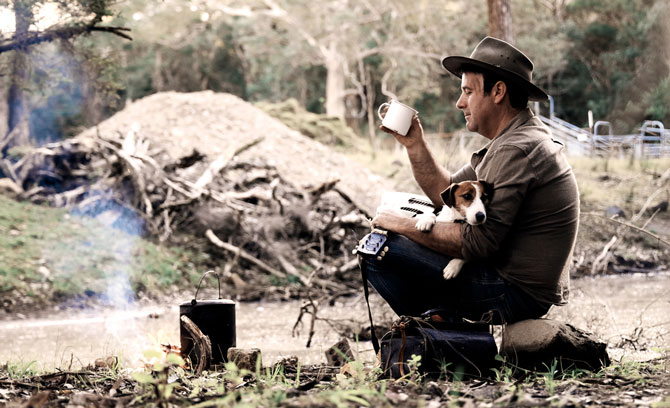 I’ve been making a life and making music with Felicity Urquhart for a couple of years now and the song Bogswamp has become a regular in our set. A few weeks ago we made a video clip for Bogswamp. It would have been nice to go back to that spot and recreate the experience ‘on location’ but our budget of time and money didn’t allow for it. Maybe that was for the best anyhow. As the song itself says, the magic of this great land can’t really be captured in a photograph (or a video) in a way that does it justice.

Thankfully our neighbour in Kangy Angy on the central coast of NSW has a property with a bit of bush and some tracks and trails that proved a good option.

We wanted to be as faithful to the story in the song as possible so we incorporated the campfire, spuds, pot of tea, starry skies and of course, Wilson. Being a Jack Russell and an adolescent at that, Wilson has a very ‘strong’ personality. But with the appropriate enticements he did great, prompting Duncan Toombs (the videographer) to rate him in the top 5 ‘animals’ he’s worked with over his career.

The only moments of “distraction” came from the flock of sheep on the property and the camera drone that Duncan was filming with as it followed us on our journey along the trail.

At one point when Wilson was ‘off leash’, some playful new lambs invited him to a game of chasey – which he politely obliged, but after setting a world record for the 100 metre sprint through a boggy paddock in work boots, I was able to get him back quick smart. Staying focused on the task at hand was key.

Bogswamp is about the power of music, nature and mateship to get you through the challenges of life, told from the perspective of a guy and his dog out in the sticks on their lonesome. That general sentiment plus the lyric, “…my little dog and me and no one else around…” got Felicity out of a fair bit of screen time in the narrative part of the clip. But it’s no word of a lie that any film clip is vastly enhanced through healthy doses of Felicity Urquhart screen time.

Thankfully, that opportunity came in the performance component of the clip. After finishing up the shoot at the neighbour’s, we came home and set up in a little outdoor kitchen that I’ve been working on but is still unfinished. It’s all rustic and recycled and had an ambience that worked in well with the footage from next door. Felicity and I played through the song a bunch of times, she looking gorgeous and I doing my best to accentuate her beauty by way of providing contrast. Soon enough, Duncan announced that he was very happy with what we’d got and he had plenty to work with. 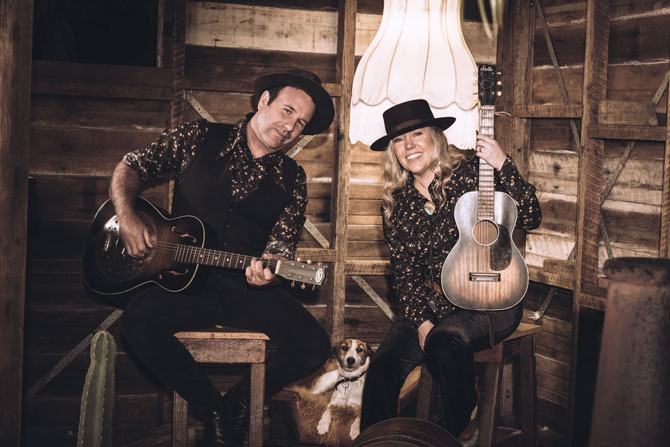 All in all it was the most painless shoot I’ve been involved in. The last time we made a video, Duncan had me dancing on a treadmill in front of a green screen – three activities I never do. In sharp contrast, I truly felt in my element shooting Bogswamp. Tramping around the bush playing guitar with my dog in tow and sitting around a campfire eating spuds and drinking tea are activities as natural to me as breathing. Our campfire might not have been beside a Boab underneath a sky of Kimberley diamonds, but making the clip felt like that long sustained note got a little amplification. 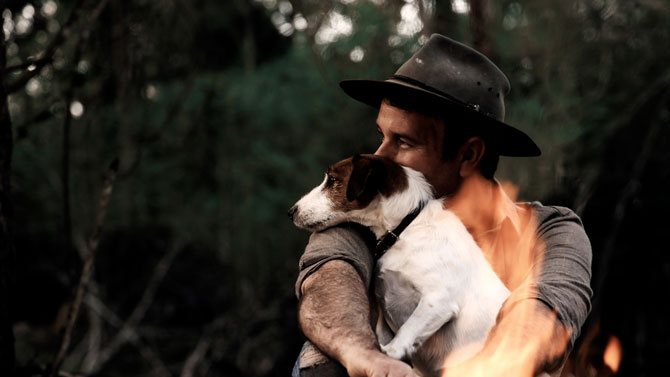 We live in an unspeakably beautiful land that too many of us are largely disconnected from. Making the clip for Bogswamp reconnected me not only in the moment…but also to that starry night in the Kimberley…and then farther back to the birth of The Waifs…and beyond…to my childhood where the bush was my playground and there was lots of time to play.

Bogswamp is a playful song, but our desire for listeners goes beyond simply enjoying the fun in it. We’d feel like we’ve done it right if we can inspire connection to the power in nature and music to get you unstuck from a Bogswamp and back on the trail again. 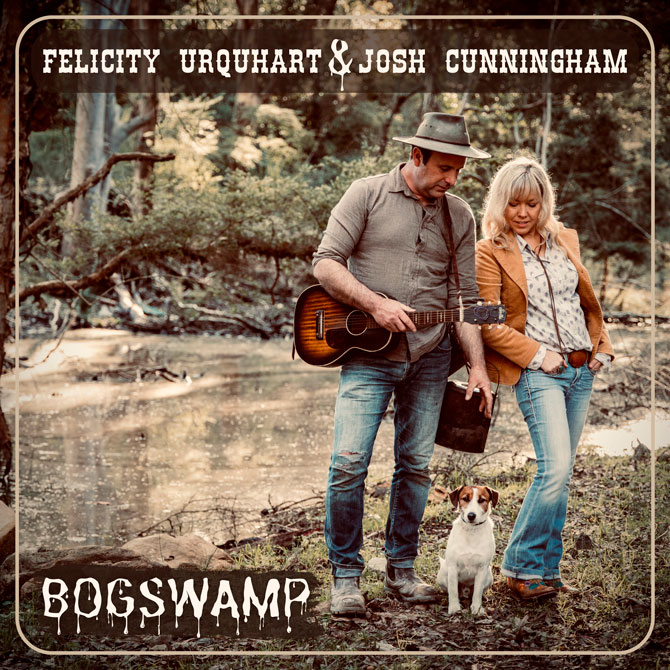 The single, Bogswamp by Felicity Urquhart & Josh Cunningham, is out now on ABC music.

Or check out BOGSWAMP on Spotify or Apple Music: